In the heart of Filmore District in San Francisco is a terrific pizzeria called Delfina. My husband and I had lunch there one day and the food, atmosphere and service were terrific. While  tables and the outside patio were full of diners the counter was a decidedly much quieter place to be.

Need Weed…And A Little Something For You!

I think the image speaks for itself.  Taken in San Francisco at Pier 39. 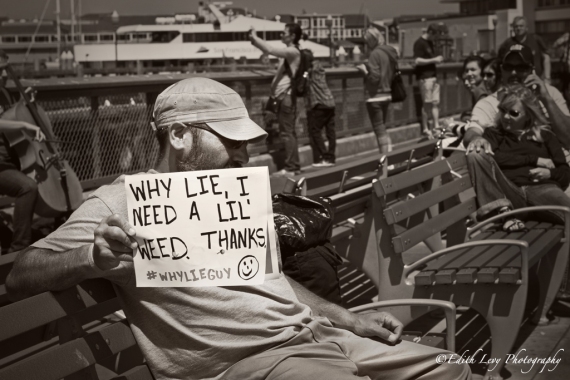 And now for a little something for you guys and quite appropriate for this post. I found out today that PhotoWhoa is offering a free ebook on Street Photography. The Street Collective  is the result of many hours interviewing top photographers such as Bryan Formhals (of LPV Magazine) and World Press Award winner Laura Pannack about their process and how they achieve
their unique looks. I’ve just downloaded it myself and it looks quite good. You can download it here. When you get to the PhotoWhoa click on Freebies in the navigation bar and scroll to the bottom. Enjoy!

The Streets of San Francisco

Before I get onto today’s post I would be remise if I didn’t give a shout out to Mark Gvazdinskas of Silent G Photography who gave me some great tips and shooting locations prior to my California trip and to Jim Nix of Nomadic Pursuits who’s created some terrific travel guides that you can find on his site (and they’re free). If you haven’t checked out these 2 talented photographers I highly recommend that you do.

There are times when I really enjoy just playing tourist. It doesn’t always have to be about getting the shot. My husband and I were exploring the city and as I looked down the street I loved the sights and sounds of the busy street. I decided to grab a shot. It was busy, there were cars in front of me, the composition wasn’t great but this was just going to be a grab shot for my own person record.

Here’s the image right out of the camera. I haven’t done anything to it. 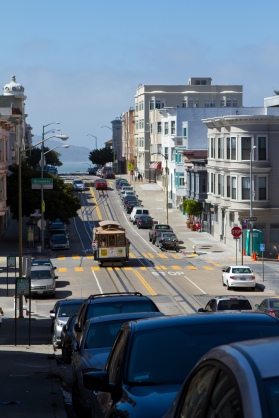 I loved the cable car, the buildings, the view to the water. So I decided to try create a more stylized, “funky” version of this scene. I used Topaz Clarity to bring out a bit of detail in the image and then I used LucisArt to create the final stylized version. Let me know what you think?

Click on the images to enlarge (they really do look better) or to Purchase a Print.

I processed this image the same way. I loved the busyness of the street and that you could see the Bay Bridge. 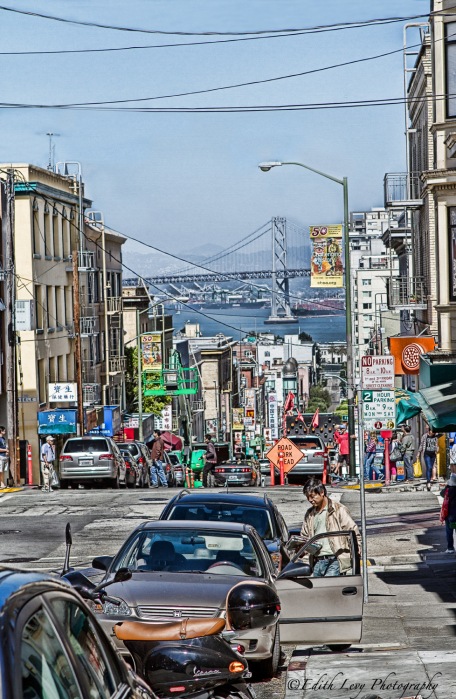 iPhone Friday – I Left My Heart In San Francisco

Even though I had my DSLR with me through my travels I still had to take some shots with my iPhone. I didn’t bring my laptop with me so shooting with my iPhone allowed me to process images during down times and of course it also allowed me to share images on Facebook throughout the week. If you don’t follow me on Facebook (or haven’t “Liked” Edith Levy Photography) you can find me here. I do share some different images there so come on over and have a look.

Here are a few images from San Francisco.

I Left My Heart In San Francisco!

Because I was away last week I didn’t have time to prepare a proper review for Topaz Lens Effects but I wanted to let you know of a promotion that Topaz Labs is running right now. Until July 31st you can get 50% off Lens Effects ($79.99 to $39.99). Use PROMO CODE julylens. If you want to get an idea of what this wonderful plug-in does check out one of Topaz Labs upcoming webinars dedicated to Lens Effects. You can check a couple of my previous posts where I’ve processed images using Lens Effect here and here.

I’m back after a wonderful week away in California. It was clearly not long enough but I did come back with over 1600 images to process. We flew into San Francisco and took the week to drive down the Pacific Coast Highway ending in Los Angeles. I’ve just returned and have a lot of catching up to do so I’ll keep this post short but thought I would share an image of the iconic Golden Gate Bridge. I was up early on my first morning (actually it was easy to do with the time difference on the west coast) and headed out to Fort Point to shoot the bridge at sunrise. This was one of the first images I shot when I got there and then….the fog rolled in. Not the fluffy white, nice fog but the grey, covering everything so the sun wouldn’t shine through fog.  I held out hope but the sunrise I was hoping for was not to be.